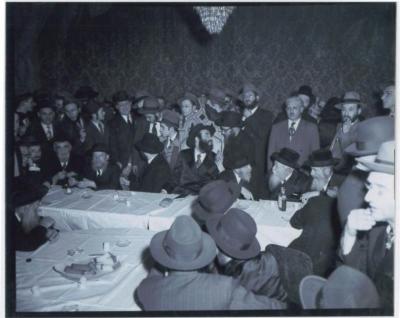 caption:
This is a picture of the chassans tisch (groom’s table) at the wedding of Rabbi Eli Chaim Carlebach & Hadassah Schneersohn in New York City on March 16, 1949, the wedding was attended by many great Rabbis.

Seated second from right in the picture is the Kopycznitzer Rebbe. Next to him is Rabbi Shmaryahu Gurary (“Rashag”, son-in-law of the sixth Lubavitcher Rebbe), then the groom Rabbi Eli Chaim Carlebach (speaking to his father in law Rabbi Zalman Schneerson), The Lubavitcher Rebbe, Rabbi Eliezer Silver, and Rabbi  Moshe Dov Ber Rivkin (Rosh Yeshiva of Yeshivah Torah Vodaath in Brooklyn).

Seated to the right of the Kopycznitzer Rebbe, is Rav Binyomin Halberstam, Ridniker rebbe ztz"l, who was then living in NYC (identified by his son, Dr. Yaakov Halberstam).


From the Collection of Moshe Gumbo