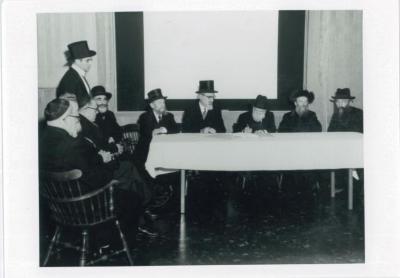 caption:
Seen next to Rabbi Eliezer Silver, is Rabbi Joseph Ber (Yosef Dov) Soloveitchik who is the bride’s father, also seen are leaders of the Tolner Chasidic sect, and the chassan (groom) standing at the left.

The chassan succeeded his father as the Tolner Rebbe of Boston for the last twenty years of his life until 1997 and was a professor and head of the Judaic Studies Department at Harvard University.

From the Collection of Moshe Gumbo