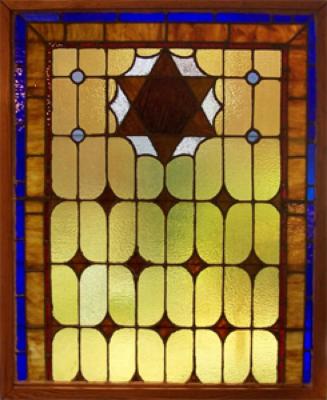 caption:
A ruby and amber Star of David is the dominant motif in this leaded glass window.  Blue circles and amber diamonds accentuate heavily leaded gold-colored glass panels. A border of blue, amber and ruby stripes frames the top and sides.

Description
Beth Israel Congregation was Philadelphia’s third oldest congregation, being founded in 1840.  Originally it was known as the Polish Congregation.  Its first services were conducted in a rental hall.  In 1849, it dedicated a new facility on Crown Street.  In 1894, it moved to a renovated church, and in 1914, erected a majestic Moorish temple on 32nd Street and Montgomery in the Strawberry Mansion section of town.  The Eden window derives from this building, where the congregation remained for forty years. In 1964, it merged with Beth Zion, and is currently housed at 18th and Spruce Streets.

This window was dedicated by Avi and Judith Eden in honor of their parents, Sham and Nachum Eden.  The Edens have been active in Zionist and Hebrew educational activities in Cincinnati ever since their return from a sojourn in Israel, 1948 to 1952, during the War of Independence.