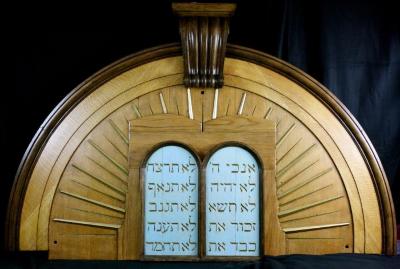 Description
This items is the combination of two separate pieces.  The Decalogue comes from a synagogue of unknown origin but was used as an ark decoration in the University of Michigan Hillel in Ann Arbor.  It was acquired for the Hillel collection by Debbie Fenichel from the Mandell L. Berman Hillel Center at the University of Michigan, Ann Arbor.

The Decalogue was later combined with the decorative frame from what had been Ahavat Achim Sherith Israel congregation in Cincinnati’s Avondale neighborhood (then known as the Reading Road Temple).  A semi-circular decorative Decalogue frame with raised rays emanating from a central Decalogue (which is missing) to a border which is framed in a darker wood.  The light wood frame is surrounded by a heavy wooden molding that has a central decorative keystone.  Architecturally the overall design mirrors the exterior of the synagogue building in which it originally hung.  In 1998 when the Revelation Baptist Church was undergoing renovations, the then Hillel Director, Rabbi Abie Ingber, was able to rescue the frame but was unable to locate the original Decalogue.  The frame was donated by Randy Plikerd.

This composite piece was dedicated by  Marilynn Braude in loving memory of her husband, Abraham S. Braude,  on April 27, 2003.