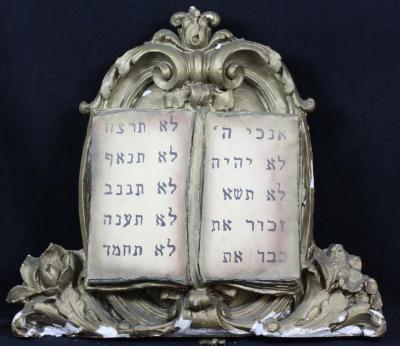 caption:
The shape is that of an open book, centered in an ornate setting with scrolls.  The entire piece is made of plaster and appears to be from one mold.

Description
There are two different accounts of the founding of Agudath Achim.  In a history commissioned by the Louisville Lodge of Bnai B’rith for its 125th Anniversary, (Adath Louisville, by Herman Landau, 1981), the origin of the congregation is fixed at 1922, the project of families living in the West End.  It occupied several sites in the neighborhood until it purchased its own building at 1113 W. Jefferson, formerly St. John’s Episcopal Church.  (It is from this building that the artifact at Hillel was preserved.)  In 1964, it was forced to sell the building to the city’s urban renewal agency for $55,000.  The congregation hoped to find a new location, but failed.  In 1971, it merged with Anshei Sfard.

A somewhat different account of the history of Agudath Achim is provided by Lee Shai Weissbach (The Synagogues of Kentucky, University Press of Kentucky, 1995).Weissbach attributes the organization of the synagogue to the movement of Anshei Sfard out of the West End in 1903.  It is Weissbach’s contention that the departure of Anshei Sfard left a void in the old neighborhood of Orthodox Jews accustomed to walking to synagogue, and it was to fill this void that Agudath Achim was organized around 1905.  It held its services in a series of temporary locations, and only in 1917 did it move into a building of its own, the former St. John’s Episcopal Church, from which the decalogue derives.  Weissbach’s book contains a photo of this building, and of the artifact acquired by Hillel in 1995.

According to family oral history, Alex (Eliyahu) Speevack paternal grandfather of Frimie (Mrs. Max) Weinstein of Louisville, Kentucky, was the main force behind the founding of Anshei Sfard and Agudath Achim, after emigrating from Kamenets Poldolsk, Ukraine in the late 19th century. Speevack, a young orthodox Jew, whose surname was Kopev, married Anna Speevack and took her family name in order to avoid conscription into the Czar’s army. Leaving Ukraine alone Alex arrived in New York City where he had distant relatives. Like many immigrants at the time, Anna followed later. Eventually Alex settled in Louisville where he probably knew people and became a presser in a garment factory.

Anshei Sfard:  Anshei Sfard dates back to 1893, when a group of East European immigrants to Louisville from a Hasidic area in the south of Russia met in a private home to hold a Passover service.  The name of the congregation is a reference to the Sephardic rite adopted by Hasidic worship. A few years after its founding, Anshei Sfard bought a building vacated by Reform Congregation Brith Shalom, and remained at that site until 1958.  Even earlier, finding itself in the path of a new North-South Expressway (later I-65), the congregation purchased 171/2 acres on Dutchman’s Lane, next to the site of the new YMHA (later JCC) where it still functions.

The merger of Agudath Achim with Anshei Sfard maintained the viability of the younger congregation.  In 1973, Anshei Sfard observed its 80th anniversary.  It had 300 members in 1980.

When the Anshei Sfard congregation moved out of the West End of Louisville, Alex started Agudath Achim so that orthodox residents would still have shul within walking distance.