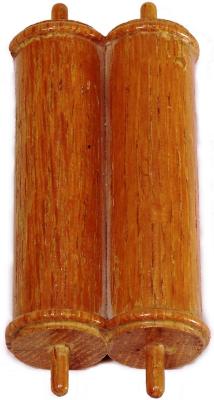 caption:
Carved wooden door handle for the Ark in the shape of a Torah scroll from the Temple Beth Israel, Chicago. Michael and Susan Lorge, children of the late Rabbi Ernst Lorge, secured the ark door handle for Hillel.

Description
Temple Beth Israel was organized in 1917, in the Albany Park area of Chicago, with the help of Rabbi Samuel S. Cohen, a graduate of the Hebrew Union College, and Rabbi at Zion Temple, and then at Temple Mizpah, which he organized.  A Sabbath school and women’s auxiliary soon followed.

In 1918, land was purchased on Spaulding Avenue, and the following year, the Temple obtained the services of Rabbi S. Felix Mendelsohn of Newark, New Jersey. He was one of two Chicago rabbis who preached the Zionist message in their congregations and in the community in the years following the Balfour Declaration.  The building of the temple was pursued over the next several years.  Ground was broken in 1922, and the building was dedicated in 1923.

With the end of World War II, the settlement pattern of the Chicago Jewish community underwent a radical change.  From the 1930s to the 1950s, Jews moved to the northern part of the city and beyond, to the northern suburbs.  By 1963, 80% of the Jewish population resided in the northern sector.  Temple Beth Israel moved from Albany Park to Skokie.  Rabbi Ernst Lorge became Associate Rabbi, and succeeded to the pulpit, representing a Reform rabbinate in Chicago who came from Germany and brought a unique European experience to their new community.  He served the congregation for more than four decades.

Michael and Susan Lorge, children of the late Rabbi, secured the ark door handle for the University of Cincinnati Hillel Collection.