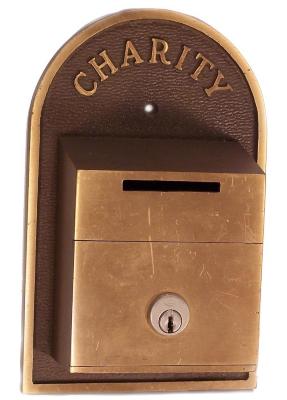 caption:
A bay-shaped, arched brass/patinated box bearing the word “CHARITY”, with slot for coins and lock.

From Congregation Sherith Israel, San Francisco, California.  The charity box was affixed to back wall of the sanctuary until remodeling in 1949.

Description
Congregation Sherith Israel is the oldest congregation in San Francisco, established in 1849 on Kearny Street.  The 100 Anniversary Booklet of the congregation (1850-1950, from the American Jewish Archives) explains that in the year of the gold rush of California, when the day came in the Fall of 1849 for the observance of Yom Kippur, a minyan of loyal Jews came together.  They conducted the High Holy Day services, which inaugurated the year 5610.


When Passover occurred in 1850, a group of pioneer Jews of San Francisco met at Hotel Allbion on April 13, 1850.  They organized the Congregation known as Sherith Israel with the formalities of founding completed on August 20, 1850.

Rooms were rented in Merchants Court, between Montgomery and Sansome Streets, for the purpose of holding services.  These premises were destroyed by fire just one month later.  Quarters were secured on Washington Street and again destroyed by fire.  The cornerstone of the first synagogue structure was laid on Stockton Street, between Broadway and Vallejo Streets on August 6, 1854 and cost $10,000.  The congregation worshipped here until August 26, 1870, at which time the larger Gothic structure at Post and Taylor Streets was dedicated.  It cost $70,000. These buildings no longer exist.

The cornerstone for the third Temple at California and Webster Streets was laid on Washington’s Birthday, February 22, 1904. This is the current home of the congregation.  In 1945 the government used Sherith Israel’s sanctuary for a founding session of the United Nations.