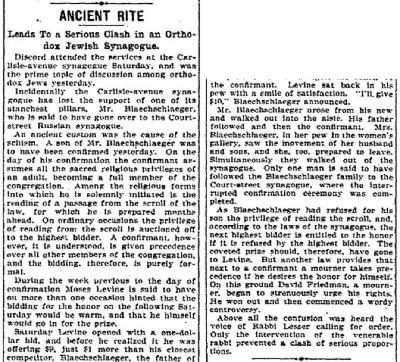 Leads To a Serious Clash in a Orthodox Jewish Synagogue

Discord attended the services at the Carlisle-avenue synagogue Saturday, and was the prime topic of discussion among orthodox Jews yesterday.

Incidentally the Carlisle-avenue synagogue has lost the support of one of its stanchest pillars. Mr. Blaechschlaeger, who is said to have gone over to the Court-street Russian synagogue.

An ancient custom was the cause of the schism. A son of Mr. Blaechschlaeger  was to have been confirmed yesterday. On the day of his confirmation the confirmant assumes all sacred religious privileges of an adult, becoming a full member of the congregation. Among the religious forms into which he is solemnly initiated is the reading of a passage from the scroll of the law, for which he is prepared months ahead. On ordinary occasions the privilege of reading from the scroll is auctioned off the highest bidder. A confirmant, however, it is understood, is given precedence over all other members of the congregation, and the bidding, therefore, is purely formal.

During the week previous to the day of confirmation Moses Levine is said to have on more than one occasion hinted that the bidding for the honor on the following Saturday would be warm, and that he himself would go in for the prize.

Saturday Levine opened with a one-dollar bid, and before he realized it he was offering --, just $1 more than his closest competitor, Blaechschlaeger, the father of the confirmant. Levine sat back in his per with a smile of satisfaction. “I’ll give $10,” Blaechschlaeger announced.

Mr. Blaechachlaeger arose from his pew and walked out into the aisle. His father followed and then the confirmant. Mrs. Blaechschlaeger, in her pew in the women’s gallery, saw the movement of her husband and sons, and she too, prepared to leave. Simultaneously they walked out of the synagogue. Only one man is said to have followed the Blaechschlaeger family to the Court-street synagogue, where the interrupted confirmation ceremony was completed.

As Blaechschlaeger had refused for his son the privilege of reading the scroll, and, according the laws of the synagogue, the next highest bidder is entitled to the honor if it is refused by the highest bidder. The coveted prize should, therefore, have gone to Levine. But another law provides that next to a confirmant, a mourner takes precedence if he desires the honor for himself. On this ground David Friedman, a mourner, began to strenuously urge his rights. He won out and then commenced a wordy controversy.

Above all the confusion was heard the voice of Rabbi Lesser calling for order. Only the intervention of the venerable rabbi prevented a clash of serious proportions.