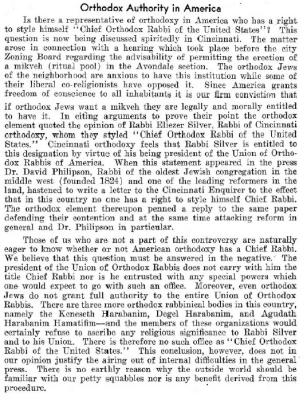 Article Regarding Orthodox Authority in America 5.27,1932

Text:
Orthodox Authority in America Is there a representative of orthodoxy in America who has a right to style himself "Chief Orthodox Rabbi of the United States"/ This question is now being discussed spiritedly in Cincinnati. The matter arose in connection with a hearing which took place before the city Zoning Board regarding the advisability of permitting the erection of a mikveh (ritual pool) in the Avondale section. The orthodox Jews of the neighborhood are anxious to have this institution while some of their liberal co-religionists have opposed it. Since America grants freedom of conscience to all inhabitants it is our firm conviction that if orthodox Jews want a mikveh they are legally and morally entitled to have it. In citing arguments to prove their point the orthodox element quoted the opinion of Rabbi Eliezer Silver, Rabbi of Cincinnati orthodoxy, whom they styled "Chief Orthodox Rabbi of the United States.' Cincinnati orthodoxy feels that Rabbi Silver is entitled to this designation by virtue of his being president of the Union of Ortho-dox Rabbis of America. When this statement appeared in the press Dr. David PhiUpson, Rabbi of the oldest Jewish congregation in the middle west (founded 1824) and one of the leading reformers in the land, hastened to write a letter to the Cincinnati Enquirer to the effect that in this country no one has a right to style himself Chief Rabbi. The orthodox element thereupon penned a reply to the same paper defending their contention and at the same time attacking reform in general and Dr. Philipson in particular. Those of us who are not a part of this controversy are naturally eager to know whether or not American orthodoxy has a Chief Rabbi. We believe that this question must be answered in the negative.- The president of the Union of Orthodox Rabbis does not carry with him the title Chief Rabbi nor is he entrusted with any special powers which one would expect to go with such an office. Moreover, even orthodox Jews do not grant full authority to the entire Union of Orthodox Rabbis. There are three more orthodox rabbinical bodies in this country, namely the Keneseth Harabanim, Degel Harabanim, and Agndath Harabanim Hamatifim—and the members of these organizations would certainly refuse to ascribe any religions significance to Rabbi Silver and to his Union. There is therefore no such office as "Chief Orthodox Rabbi of the United States." This conclusion, however, does not in our opinion justify the airing out of internal difficulties in the general press. There is no earthly reason why the outside world should be familiar with our petty squabbles nor is any benefit derived from this procedure.