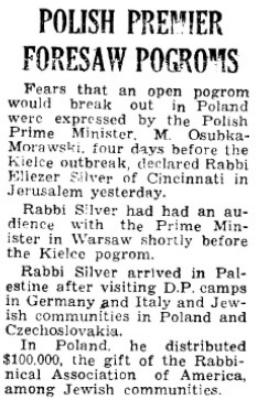 POLISH PREMER FORESAW POGRONIS Pears that an open pogrom would break out in Poland were expressed by the Polish Prime Minister. M. Osubka-Morawski. tour days before the Kielce outbreak, declared Rabbi /Meter P..ilver of Cincinnati in Jerusalem yesterday. Rabbi S9ver had had an au-dience with the Prime Min-ister in Warsaw shortly before the Kielce pogrom. Rabbi Silver arrived in Pal-estine after visiting D.P. camps In Germany And Italy and Jew-ish communities in Poland and Czechoslovakia. In Poland. he distributed $100.000. the gift of the Rabbi-nical Association of America, among Jewish communities.