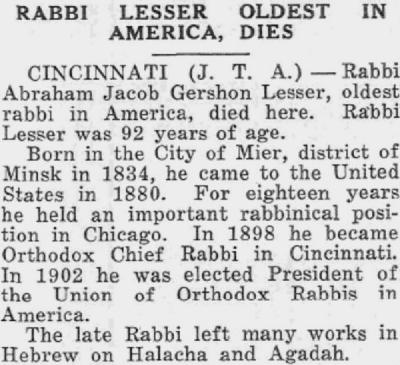 caption:
From the Chicago Sentinel , page 33

RABBI LESSER OLDEST IN AMERICA, DIES
CINCINNATI (J. T. A.) Rabbi Abraham Jacob Gershon Lesser, oldest rabbi in America, died here. Rabbi Lesser was 92 years of age. Born in the City of Mier, district of Minsk in 1834, he came to the United States in 1880. For eighteen years he held an important rabbinical posi-tion in Chicago. In 1898 he became Orthodox Chief Rabbi in Cincinnati. In 1902 he was elected President of the Union of Orthodox Rabbis in America. The late Rabbi left many works in Hebrew on Halacha and Agadah.