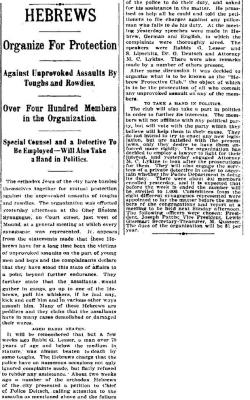 Article regarding Jewish in Cincinnati Organizing for Protection Against Unprovoked Assaults 5.1.1899

Against Unprovoked Assaults By Toughs and Rowdies.

Over Four Hundred Members in the Organization.

Special Counsel and a Detective To Be Employed—Will Also Take a Hand in Politics.


I The orthodox Jews of the City have banned themselves together for mutual protection against the unprovoked assaults of toughs and rowdies. The organization wan effected yesterday afternoon at the Cher Sholom Synagogue, on Court street, just west of Mound, at a general meeting at which every synagogue was represented. It appears from the statements made that these Hebrews have for a long time been the victims of unprovoked assaults on the part of young men and boys and the complainants declare that they hare stood this state of affairs to a point beyond further endurance.  They further state that the assailants would gather in gangs, go up to one of the Hebrews, pull his whiskers, if he had any, kick and cuff him and in various other ways assault him. Many of these Hebrews are peddlers and they claim that the assailants have in many cases demolished or, damaged their wares.

AGED RABBI BEATEN.
It will be remembered that but a few weeks ago Rabbi G. Lesser, a man over 70 years of age and below the medium in stature, was almost beaten to death by some toughs. The Hebrews charge that the police have on numerous occasions not only ignored complaints made, but flatly refused to render any assistance. About two weeks ago a number of the orthodox Hebrews of the city presented a petition to Chief of Police Deutsch, calling attention to the assaults as mentioned above and the failure of the police to do their duly, and asked for his assistance in the matter. He promised to help all he could and told the petitioners to file charges against any policeman who fails to do his duty. At the meeting yesterday speeches were made in Hebrew, German and English, in which the complaints were thoroughly aired. The speakers were Rabbis G. Lesser, and S. Lipschitz, Dr. G. Deutsch and Attorney M. C. Lykins, There were also remarks made by u number of others present. After some discussion it was decided to organize what is to be known as the "Hebrew Protective Club." the object at which Is to be the prosecution of all who commit any unprovoked assault un any of the members.


TO TAKE A HAND IN POLITICS.

The club will also take a part in polities in order to further its interests. The members will not affiliate with any political party, but will vote with the party which they believe will help them In their cause. They do not intend to try to enact any new legislation, but are satisfied with the present laws, only they desire to have them enforced more rigidly. The organization has decided to employ a lawyer to fight for their interests, and yesterday engaged Attorney M. C. Lykins to look after the prosecutions for them. They will also engage the services of private detective in order to ascertain whether the Police Department is doing its duty. There were about 400 members enrolled yesterday, and it is expected that before the week is ended the number will be swelled to 1,000. Committees from the'eight different synagogues represented were appointed to lay the matter before the members of the congregations and report at a meeting to be held next Sunday afternoon.The following officers were chosen: President. Joseph Pattis: Vice President. Lewis Glssmar: Secretary-Treasurer, M. Quasser. The dues of the organization will be $1 per year.