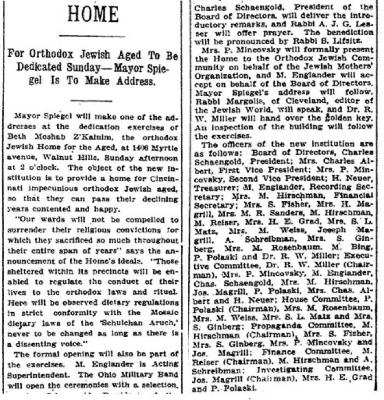 Article regarding Cincinnati Jewish Home for Aged to be Dedicated 9.25.14

HOME - For Orthodox Jewish Aged To Be Dedicated Sunday—Mayor Spiegel Is To Make Address.

Mayor Spiegel will make one of the addresses at the dedication exercises or Beth Moshab Z'Kainim, the orthodox Jewish Home for the Aged, at 1406 Myrtle avenue,Walnut Hills, Sunday afternoon at 2 o'clock. The object of the new institution is to provide a home for Cincinnati impecunious orthodox Jewish aged, so that they can pass their declining years contented and happy.

"Our wards will not be compelled to surrender their religious convictions for which they sacrificed so much throughout their entire span of years" says the announcement of the Homes ideals. "Those sheltered within its precincts will be enabled to regulate the conduct of their lives to the orthodox laws and ritual. Here will be observed dietary regulations in strict conformity with the Meanie dietary laws of the Schulchan Aruch,' never to be changed as long as there is a dissenting voice."

The formal opening will also be part of the exercises. M. Englander is Acting Superintendent. The Ohio Military Bend win open the ceremonies with a selection. _•. —
Charles Schaengold. President of the Board of Directors, will deliver the introductory remarks, and Rabbi A. J. G. Lesser will offer prayer. The benediction will be pronounced by Rabbi S. Lifsitz.

Mrs. P. Mincovsky will formally present the Home to the Orthodox Jewish Community on behalf of the Jewish Mothers' Organization, and M. Englander will accept on behalf of the Board of Directors. Mayor Spiegel's address will follow. Rabbi Margolis, of Cleveland, editor of the Jewish World, will speak, and Dr. R. W. Miller will hand over the golden key. An inspection of the building will follow the exercises.