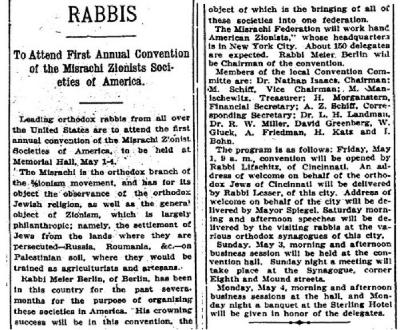 Article Regarding the Mizrachi Convention Held in Cincinnati - 4.26.1914


Leading orthodox rabbis from all over the United States are to attend the first annual convention of the Misrachi Zionist Societies of America, to be held at Memorial Hall, May 1-4.

The Misrachi is the orthodox branch of the Zionism movement, and has for its objective the observance of the orthodox Jewish religion, as well as the general object of Zionism, which is largely philanthropic; namely, the settlement of Jews from the lands where they are persecuted – Russia, Roumania &c-on Palestinian soil, where they would be trained as agriculturists and artisans.

Rabbi Meier Berlin, of Berlin, has been in this country for the past several months for the purpose of organizing these societies in America. His crowning success will be in this convention, the object of which is the bringing of all these societies into one federation.

The Misrachi Federation will work hand American Zionists, “whose headquarters is in New York City. About 150 delegates are expected. Rabbi Meier Berlin will be Chairman of the convention.

Sunday, May 3, morning and afternoon business session will be held at the convention hall. Sunday night a meeting will take place at the Synagogue, corner of Eighth and Mound streets.

Monday, May 4, morning and afternoon business sessions at the hall, and Monday night a banquet at the Sterling Hotel will be given in honor of the delegates.