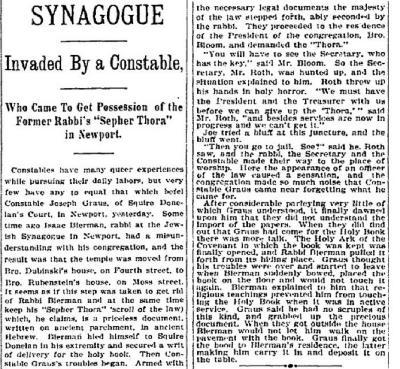 Article Regarding Newport Kentucky "Synagogue Invaded By a Constable" in 1899

Invaded By a Constable,

Who Came To Get Possession of the Former Rabbi's "Sepher Thora" in Newport.


Constables have many queer experiences while pursuing their daily labors, but very few have any to equal that which befell Constable Joseph Graus. of Squire Donelan's Court, in Newport, yesterday. Some time ago Isaac Blerman.,rabbi at the Jewish Synagogue in Newport, had a misunderstanding with his congregation, and the result was that the temple was moved from Bro. Dabinski's house, on Fourth street, to Bro. Rubenstein's house on Moss street. It seems as If tilts step was taken to get rid of Rabbi Blerman and at the same time keep his "Sepher Thora" (scroll of the law), which, he claims, is a priceless document, written on ancient parchment, in ancient Hebrew. Blerman held himself to Squire Donelan in his extremity and secured a writ of delivery for the holy hook. Then Constable Graus's troubles began. Armed with the necessary legal documents the majesty of the law stepped forth, ably seconded by the rabbi. They proceeded to the residence of the President of the congregation, Bro. Bloom, and demanded the "Thora."

"You will here to see the Secretary, who has the key." said Mr. Bloom. So the Secretary, Mr. Roth, was hunted up, and the situation explained to him. Roth threw up his hands In holy horror. "We must have the President and the Treasurer with us before we can give up the 'Thora,'" said Mr. Roth "and besides services are now In progress and we can't get it."

Joe tried a bluff at this juncture, and the bluff went, "Then you go to jail. See?" said he. Roth saw, and the rabbi, the Secretary and the Constable made their way to the place of worship. Here the appearance of an officer of the law caused a sensation, and the congregation made so much noise that Constable Graus came near forgetting what he came for.

After considerable parleying very little of which Graus understood, it finally dawned upon him that they did not understand the import of the papers. When they did find out that Graus had come for the Holy Book there was more talk. The Holy Ark of the Covenant in which the book was kept was finally opened, and Rabbi Blerman pulled it forth from its hiding place. Graus thought his troubles were over and started to leave when Blerman suddenly bowed, placed the book on the floor and would not touch it again. Blerman explained to him that religious teachings prevented him from touching the Holy Book when it was in active service. Graus said be had no scruples of this kind, and grabbed up the precious document. When they get outside the house Blerman would not let him walk on the pavement with the book. Graus finally got the book to Blerman's residence, the latter making him carry it in and deposit it on the table.

Description
From the Cincinnati Enquirer, article from 1/31/1899