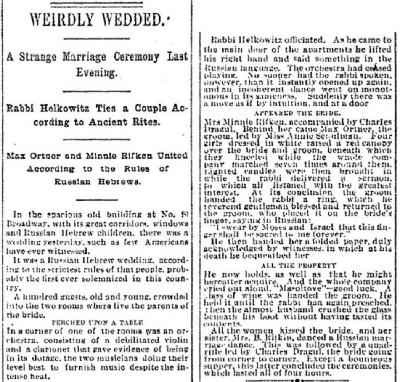 Rabbi Helkowitz Ties a Couple According to Ancient Rites.

Mac Ortner and Minnie Rifken United According to the Rules of Russian Hebrews.

In the spacious old building at No. – Broadway, with its great corridors, windows and Russian Hebrew children, there was a wedding yesterday, such as few Americans have ever witnessed.

It was a Russian Hebrew wedding according to the strictest rules of that people, probably the first ever solemnized in this country.

A hundred guests, old and young, crowded into the two rooms where live the parents of the bride
PERCHED UPON A TABLE
In a corner of one of the rooms was an orchestra, consisting of a debilitated violin and a clarionet that gave evidence of being in its dotage, the two musucians doing their level best to furnish music despite the intense heat.

Rabbi Helkoqitz officiated. As he came to the main door of the apartments he lifted his right hand and said something in the Russian language. The orchestra had ceased playing. No sooner had the rabbi spoken, however, than it instantly opened uup again and an incoherent dance went on monotonous in its sameness. Suddenly there was a move as if by intuition, and at a door
APPEARED THE BRIDE.

Mrs. Minnie Rifken, accompanied by Charles Bragul. Behind her came Max Ortner, the groom, let by Miss Anuis Scuulwan. Four girls dressed in white raise a red canopy over the bride and groom, beneath which they marched seven times around them. Lighted candles were then brought in while the rabbi delivered a sermon in which all listened with the greatest interest. At its conclusion the groom handed the rabbi a ring, which he blessed and returned to the groom, who placed it on the bride’s finger, saying in Russian:

“I swear by Moses and Israel that this finger shall b sacred to me forever.”

He then handed her a folded paper, duly acknowledged by witnesses, in which at his death he bequeathed her
ALL THE PROPERTY
He now holds, as well as that he might hereafter acquire. And the whole company cried out aloud, “Masotove”-- good luck. A glass of wine was handed to the groom. He held it until the rabbi again preached. Then the almost husband crushed the glass bneath his boot without having tasted its contents.

All the women kissed the bride, and her sister. Mrs. B Riftkin danced a Russian marriage dance. This was followed by a --- led by Charles Dragul, the bride going from corner to corner. Except the bounteous supper, this latter concluded the ceremonies.