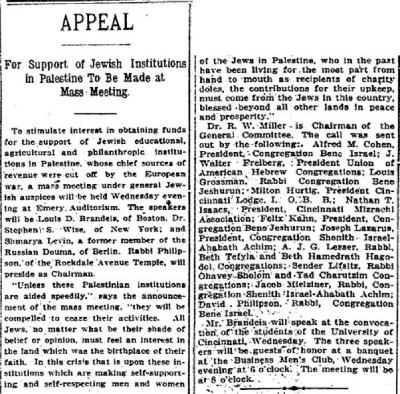 caption:
From the Cincinnati Enquirer, October 10, 1914

For Support of Jewish Institutions in Palestine To Be Made at Mass Meeting.

To stimulate interest in obtaining funds for the support of Jewish educational agricultural and philanthropic institutions in Palestine, whose chief sources of revenue were cut off by the European war,  a mass meeting under general Jewish auspices will be held Wednesday evening at Emery, Auditorium. The speakers will be Louis D. Brandeis, of Boston. Dr. Stephen S. Wise, of New York; and Shumarya Levin, a former member of this Russian Douma, of Berlin. Rabbi Phillipson, of the Rockdale Avenue Temple, will preside as Chairman.

“Unless these Palestinian institutions are aided speedily,” says the announcement of the mass meeting, “they will be compelled to cease their activities. All Jews, no matter what be their shade of belief or opinion, must feel an interest in the land which was the birthplace of their faith. In this crisis that is upon these institutions which are making self-supporting and self-respecting men and women of the Jews in Palestine, who in the past have been living for the most part have been living for the most part from hand to mouth as recipients of charity doles, the contributions for their upkeep, must come from the Jews in this country, blessed beyond all other lands in peace and prosperity.”

Mr. Brandeis will speak at the convocation of the students of the University of Cincinnati, Wednesday. The three speakers will be guests of honor at a banquets at the Business Men’s Club, Wednesday evening at 6 o’clock. The meeting will be at 8 o’clock.