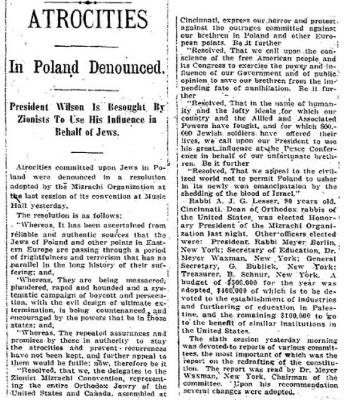 President Wilson Is Besought By Zionists To His Influence in Behalf of Jews.

Atrocities committed upon Jews in Poland were denounced in a resolution adopted by the Mizrachi Organization at the last session of its convention at Music Hall yesterday.

The resolution is as follows:

“Whereas, It has been ascertained from reliable and authentic sources that the Jews of Poland and other points in Eastern Europe are passing through a period of frightfulness and terrorism that has no parallel in the long history of their suffering; and,
‘Whereas, They are being massacred, plundered, raped and hounded and a systematic campaign of boycott and persecution, with the evil design of ultimate extermination, is being countenanced, and encouraged by the powers that be in those state; and,
‘Whereas, The repeated assurances and promises by these authority to stay the atrocities and prevent recurrences have not been kept, and further appeal to them would be futile; now, therefore be it
“Resolved, that we, the delegates to the Zionist Mizrachi Convention, representing the entire Orthodox Jewry of the United States and Canada, assembled at Cincinnati, express our horror and protest against the outrages committed against our brethren in Poland and other European points. Be it further
“Resolved, That in the name of humanity, and the lofty ideals for which our country and the Allied and Associated Powers have fought, and for which 800,000 Jewish soldiers have offered their lives, we call upon our President to use his great influence at the Peace Conference in behalf of our unfortunate brethren. Be it further
“Resolved, That we appeal to the civilized world not to permit Poland to usher in its newly won emancipation by the shedding of the blood of Israel.”

Rabbi A. J. G. Lesser, 90 years old, Cincinnati Dean of Orthodox Rabbis of the United States, was elected Honorary President last night. Other officers elected were: President Rabbi Meyer Berlin, New York; Secretary of Education, Dr. Meyer Waxman, New York; General Secretary, G. Bublick, New York; Treasurer, B. Schnur, New York. A budget of $500,000 for the year was adopted, $400,000 of which is to be devoted to the establishment of industries and furthering education in Palestine, and the remaining $100,000 to go to the benefit of similar institutions in the United States.

The sixth session yesterday morning was devoted to reports of various committees, the most important of which was the report on redrafting of the constitution. The report was read by Dr. Meyer Waxman, New York. Chairman of the committee. Upon his recommendation several changes were adopted.