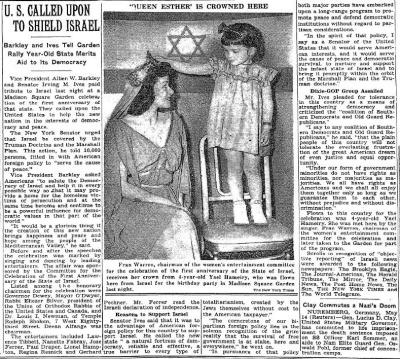 Vice President Alben W. Barkley and Senator Irving M. Ives paid tribute to Israel last night at a Madison Square Garden celebration of the first anniversary of tat state. They called upon the  United States to help the new nation in the interests of democracy and peace. The New York Senator urged that Israel be covered by the Truman Doctrine and the Marshall Plan. This action, he told 10,000 persons, fitted in with American foreign policy to “serve the cause of peace.”

Vice President Barkley asked Americas “to salute the Democracy of Israel and help it in every possible way so that it may provide a home for the homeless victims of persecution and at the same time become and continue to be a powerful influence for democratic values in that part of the world.”

“It would be a glorious thing if the creation of this new nation brings happiness and peace and hope among the people of the Mediterranean Valley,” he said.

Before and after the speeches the celebration was marked by singing and dancing by leading entertainers. The affair was sponsored by the Committee for the Celebration of the First Anniversary of the State of Israel.

Listed among the honorary chairmen for the celebration were Governor Dewey, Mayor O’Dwyer, Rabbi Eliezer Silver, president of the Union of Orthodox Rabbis of the United States and Canada, and Dr. Louis I. Newman, of Temple Rodeph Sholom, 7 West Eighty-third Street, Deean Alfange was chairman.

Reasons to Support Israel.
Senator Ives said that it was to the advantage of American foreign policy for this country to support Israel. He called the new state “a natural fortress of democracy, reliable and effective, a true barrier to every type of  totalitarianism, created by the Jews themselves without cost to the American taxpayer.”

“The cornerstone of our bipartisan foreign policy lies in the solemn recognition of the grim reality that the survival of free government is at stake here and everywhere,” he went on.

“In pursuance of that policy both major parties have embarked upon a long-range program to promote peace and defend democratic institutions without regard to partisan considerations.

“In the spirit of that policy, I say as a Senator of the United States that it would serve American interests, and it would serve the cause of peace and democratic survival, to nurture ad support the infant state of Israel and to bring it promptly within the orbit of the Marshall Plan and the Truman doctrine.”

Dixie-GOP Group Assailed.
Mr. Ives pleaded for tolerance in this country as a means of strengthening democracy and criticized the “coalition of Southern democrats and Old Guard Republicans.”

“I say to any coalition of Southern Democrats and Old Guard Republicans,” he said, “that the plain people of this county will not tolerate the everlasting frustration of the great American dream of even justice and equal opportunity.

“Under our form of government minorities do not have rights as minorities, nor majorities as majorities. We all have rights as Americans and we shall all enjoy them together only so long as we guarantee them to each other, without prejudice and without discrimination.”

Scrolls of recognition of “objective reporting” of Israeli news were awarded to the following newspapers: The Brooklyn Eagle, The Journal-American, The Herald Tribune, The Mirror, The Daily News, The Post Home News, The Sun, The New York Times, and the World Telegram.