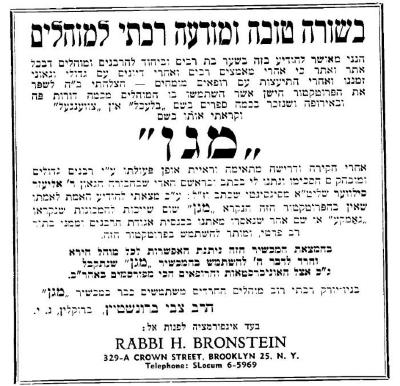 caption:
Partial translation of the ad is as follows:

After appropriate research and requests, as well as great and significant rabbis viewing how [the instrument] works, they have agreed and given me written permission. The group has been led by "the lion," the genius Rabbi Eliezer Silver (may he live for many days Amen) from Cincinnati who wrote: "Therefore I have found to inform the truth of truths that the "protector" [clamp] known as "Magen" has no connection to the instrument that they call "Gomco" or any other name that has been forbidden by us, the Agudath Harabanim, and by me personally as a Rabbi, and it is permissible to use this [Magen] "protector." With the invention of this instrument the possibility is given to every Mohel who fears and trembles to speak to God to use it, as it will also be accepted amongst the universities and doctors who are most famous in the United States.