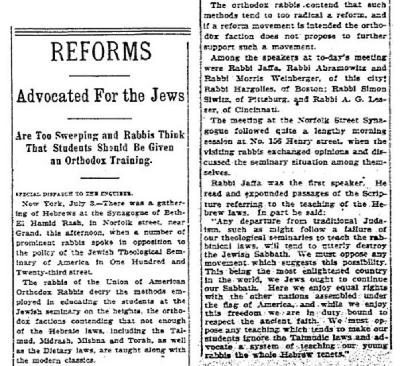 Advocated For the Jews

Are Too Sweeping and Rabbis Think That Students Should Be Given an Orthodox Training.

Special Dispatch to the Enquirer

New York, July 3 - There was a gathering of Hebrews at the Synagogue of Beth El Hamid Rash, on Norfolk street, near Grand, this afternoon, when a number of prominent rabbis spoke in opposition to the policy of the Jewish Theological Seminary of America in One Hundred and Twenty-third street.

The rabbis of the Union of American Orthodox Rabbis decry this method employed in educating the students at the Jewish seminary on the heights, the orthodox factions contending that not enough of the Hebraic laws, including the Talmud, Madras, Mishna and Torah, as well as the Dietary laws, are taught among with the modern classics.

The orthodox rabbis contend that such methods tend to too radical a reform, and if a reform movement is intended the orthodox faction does not propose to further support such a movement.

Among the speakers at to-days meeting were Rabbi Jaffa, Rabbi Abramowitz and Rabbi Morris Weinberger, of this city; Rabbi Hargoiles, of Boston; Rabbi Simon Siwitz, of Pittsburg, and Rabbi A. G. Lesser, of Cincinnati.

The meeting at the Norfolk Street Synagogue followed quite a lengthy morning session at No. 15- Henry street, when the visiting rabbis exchanged opinions and discussed the seminary situation among themselves.

Rabbi Jaffa was the first speaker. He read and expounded passages of the Scripture referring to the teaching of the Hebrew laws. In part he said:

“Any departure from the traditional Judaism, such as might follow a failure of our theological seminaries to teach the rabbinical laws, will tend to utterly destroy the Jewish Sabbath. We must oppose any movement which suggests this possibility. This being the most enlightened country in the world, we Jews ought to continue our Sabbath. Here we enjoy equal rights with the other nations assembled under the flag of America, and while we enjoy this freedom we are in duty bound to respect the ancient faith.We must oppose any teach which tends to make our students ignore the Talmudic laws and advocate a system of teaching our young rabbis the whole Hebrew tenets.