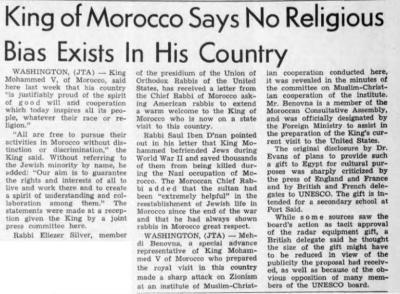 caption:
From the Southern Israelite, December 6, 1957

King of Morocco Says No Religious Bias Exists In His Country

Washington (JTA) - King Mohammed V, or Morocco, said here last week that his country “is justifiably proud of the spirit of good will and cooperation which today inspires all people, whatever their race or religion.”

“All are free to pursue their activities in Morocco without distinction or discrimination,” the King said. Without referring to the Jewish minority by name, he added: “Our aim is to guarantee the rights and interests of all live and work there and to create a spirit of understanding and collaboration among them.” The statements were made at a reception given the King by a joint press committee here.

Rabbi Eliezer Silver, member of the presidium of the Union of Orthodox Rabbis of the United States, has received a letter from the Chief Rabbi of Morocco asking American rabbis to extend a warm welcome to the King of Morocco who is now on a state visit to this country.

Rabbi Saul Iben D’nan pointed out in his letter that King Mohammed befriended Jews during World War II and saved thousands of them from being killed during the Nazi occupation of Morocco. The Moroccan Chief Rabbi added that the sultan had be “extremely helpful” in the reestablishment of Jewish life in Morocco since the end of the war and that he had always shown rabbis in Morocco great respect.

Washington (JTA) - Mehdi Benovna, a special advance representative of King Mohammed V of Morocco who prepared the royal visit in this county made a sharp attack on Zionism at an institute of Muslim-Christian cooperation conducted here, it was revealed in the minutes of the committee on Muslim-Christian cooperation of the institute, Mr. Benovna is member of the Moroccan Consultative Assembly, and was officially designated by the Foreign Ministry to assist in the preparation of the King’s current visit to the United States.

The original disclosure by Dr. Evans of plans to provide such a gift to Egypt for cultural purposes was sharply criticized by the press of England and France and by British and French delegates to UNESCO. The gift is intended for a secondary school at Port Said.

While some sources saw the board’s action as tacit approval of the radar equipment gift, a British delegate said he thought the size of the gift might have to be reduced in view of the publicity the proposal had received, as well as because of the obvious opposition of many members of the UNESCO board.