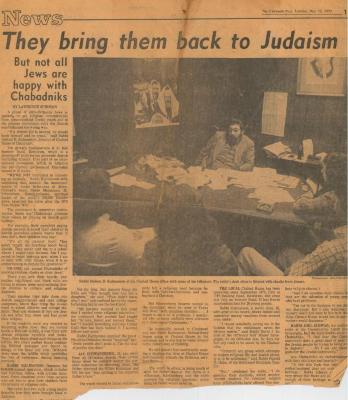 Article on the Cincinnati Chabad Movement and Rabbi Sholom B. Kalmanson 5.10.1977

caption:
They bring them back to Judaism
But not all Jews are happy with Chabadniks

A group of ultra-Orthodox Jews is working to get religious commitments from noncommitted Jewish youth and in the process of sometimes rubs the Jewish establishment the wrong way.

“If a Jewish kid is around, he should know himself and be proud,” said Rabbi Sholom B. Kalmanson, director of Chabad House of Cincinnati.

The group’s headquarter is at 1636 Summit Road, Roselawn, which is a jumping-off point for an areawide Jewish recruiting mission. It is part of an international movement, which in American has 140 Chabad (pronounced Kha-bahd) houses in 35 states.

“WE’RE NOT interested in converting anybody,” Rabbi Kalmanson said, explaining that, instead, the movement wants to make believers of Jews. Chabad’s head, Rabbi Meanchem M. Schaverson, Brooklyn-based spiritual leader of the word’s 500,000 Hasidic Jews, launched his drive after the 1973 Yom Kippur War.

The movement is somewhat controversial. Some say Chabadniks promote their causes by playing on Jewish guilt feelings.

“It’s all my parents’ fault. They never taught me anything about being Jewish. They never sent me to a school where I might have learned. Am I supposed to begin learning now, when I am so busy with other things, when it is so embarrassing to display my ignorance?”

NO ONE can accuse Chabadniks of shirking religion – theirs or other Jews’.

These men with their beards, yarmulkes (skullcaps) and black suits are trying to expose some nonpracting Jewish children to cultural and religious Judaism.

Their mission trips take them into Jewish neighborhoods and onto college campuses, where they bring the Jewish word to school children and college students. They ask students if they are Jewish and what they know and feel about their religion.

If the students show any interest in becoming ative Jews, they are invited inside mobile, a van filled with Jewish religious symbols and books.There, they learn about such things as the tefillin, two small leather boxes containing Biblical passages and bound by thongs to the head and arm. Orthodox Jews wear tefillin, which symbolize the ties of reverence, during morning services.

RABBI KALMANSON finances his $144,000 annual operation, which includes four full-time rabbis, with private donations. Some donations come from parents who ask him to save their children from Christianity or religious cults. The rabbi had two such young people.

Not for long. Her parents found the Bible and “they thought they had lost a daughter,” she said. “They didn’t know who I was,” and confined her to the house, forbidding her to see the boyfriend.

“My parents realized at this point that I needed some religious education,” she continued. Her parents had taught her “to love, honor and respect them,” but “I needed something concrete (about God) that has facts behind it. I wanted 100 per cent proof.”

Rabbi Kalmanson supplied the proof. His ultra-Orthodox rituals “inspired” her. “Some people don’t need it. I’m the kind of person who does.”

JAY SCHWARZBERG, 18, ran away from an Orthodox Jewish New Jersey home when he couldn’t accept his parents’ insistence on observing ritual. His father survived the Hitler Holocaust and felt his son “was spitting in his departed father’s face.”

The youth moved to Israel and apparently felt a religious need because he lived with Hebrew-Christians and was baptized Christian.

But Schwarzberg became soured on the movement when he went to Texasand lived “with mainline Gentiles… I began to see a lot of problems. I wondered why so many oddballs were attracted to it (born-again Christianity).

He eventually moved to Cincinnati and met Rabbi Kalmanson. Scwarzberg began going to Chabad House in the morning and is starting to come around to the rabbi’s way of thinking.

He still doesn’t feel comfortable wearing a skullcap but lives at Chabad House and regularly attends the Orthodox services there.

The youth, in effect, is doing much of what his father wanted. But there is a difference. Schwarzberg said the rabbi answers his religious questions, something his father would never do.

The Local Chabad House has been operating since September 1975, first at 7719 Reading Road, Roselawn, and since last July on Summit Road. It has live-in accommodations for 20 young people.

Rabbi Kalmanson, a portly man, 28, with gray in his beard, draws mixed and somewhat uneasy reactions from several area rabbis.

“I resent somebody saving me in the fashion that the missionary saves the African native,” said Rabbi David I. Indich of the Orthodox Golf Manor Synagogue. As an Orthodox Jew, he does not feel any need to be saved by the Chabadniks.

“Certainly any group which attempts to deepen religious life and Jewish identity is to be welcomed,” said Rabbi Harold D. Hahn of the Reformed Rockdale Temple.

“But,” continued the rabbi, “I do question their methods, which involve recruit students for released religion time (Chabadniks have offered free one hour religion classes.)

“And I do question their claims that they are the salvation of young people who have problems.

RABBI JOEL SCHWAB, the assistant rabbi at the Conservative Adath Israel Synagogue, had the least doubts about the Chabadniks, “I find that the Chabad movement does a great deal of  good for the Jewish people by trying to bring Jews to Judaism… All I see are positive gains for the Jewish community.”

Are Chabadniks an embarrassment, with their skullcaps and beards?

“A Jew who feels that they are an embarrassment does not understand his heritage,” Rabbi Schwab said. “I feel very proud that there are Jews who think enough of their heritage to look different.”