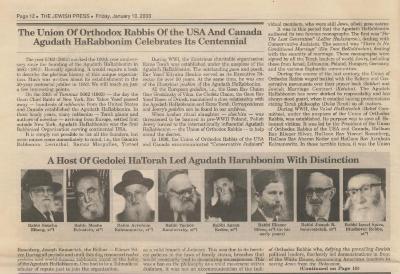 Article on 100th Anniversary of the Agudath HaRabbonim in 2012

caption:
The Union of Orthodox Rabbis of the USA and Canada Agudath HaRabbonim Celebrates Its Centennial

The year 5762 (2002) marked the 100th year anniversary since the founding of the Agudath HaRabbonim in 5662 (1902). Honestly speaking, it would require a book to describe the glorious history of this unique organization. Much was written about its establishment in the 50-year memorial jubilee in 1952. We will touch on just a few interesting points.

On the 24th of Tammuz 5662 (1902) – the day the Gaon Chief Rabbi of New York, Rav Yakov Yosef passed away – hundreds of rabbonim from the United States and Canada established the Agudath HaRabbonim. In those heady years, many rabbonim – Torah giants an authors of novella –arriving from Europe, settled first outside New York. Agudath HaRabbonim was the first Rabbinical Organization serving continental USA.

It is simply not possible to list all the founders, but some names come immediately to mind, i.e., the Gaonim Rabbonim: Levinthal, Ramaz Margulies, Yisroel  Rosenberg, Joseph Kanowitch, the Ridbaz – Eliezer Silver. During all periods and until this day, renowned roshei yeshiva and world-famous rabbonim stood at the helm of the Agudath HaRabbonim. One had to be a Talmudicial scholar of repute to just join the organization.

All the European gedolim, i.e., the Gaon Rav Chaim Ozer Grodzinsky of Vilna, the Chofetz Chaim, the Gaon Rav Yosef Rosen o Dinsk, maintained a close relationship with the Agudath HaRabbonim and Ezras Torah. Correspondence and Jewry’s gedlim can be found in our archives.

When kosher ritual slaughter – shechita – was threatened to be banned in pre-WWII Poland, Polish Jewry turned to the internationally influential Agudath HaRabbonim – the Union of Orthodox Rabbis – to help annul the decree.

In 1936, the Union of Orthodox Rabbis of the USA and Canada excommunicated “Conservative Judaism” as a valid branch of Judaism. This was due to its heretical policies in the laws of family status, breaches that would eventually lead to devastating consequences. This was a ban on the philosophy as valid movement within Judaism, it was not an excommunication of the individual members, who were still Jews, albeit gone astray.

It was in this period that the Agudath HaRabbonim authored its two famous monographs. The first was “For the Last Generation”  (LeDor HaAcharon), dealing with Conservative Judaism. The second was “There is No Conditional Marriage” (Ein Tnai BeKiddushin), dealing with the sanctity of marriage. These monographs were signed by all the Torah leaders of world Jewry, including those from Israel, Lithuania, Poland, Hungary, Germany, and the various Sephardic communities.

During the course of the last century, the Union of Orthodox Rabbis waged battled with the Reform and Conservative movements over their prayer book (Siddur) and Jewish Marriage Contract (Ketuba). The Agudah  HaRabbonim has never shirked its responsibility and has always stood guard, when it entailed issuing proclamations stating Torah philosophy (Da’as Torah) on all matters.

Topics
Agudas HaRabonim (The Union of Orthodox Rabbis of the United States and Canada); Pictures of Rabbi Silver

Description
From the Jewish Press.