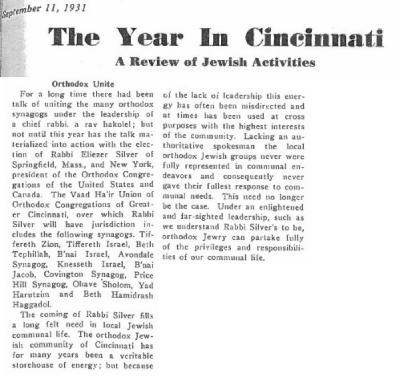 caption:
The Year in Cincinnati
A Review of Jewish Activities

For a long time there had been talk of uniting the many orthodox synagogues under the leadership of a chief rabbi, a rav hakolel; but not until this year has the talk materialized into action with the election of Rabbi Eliezer Silver of  Springfield, Mass., and New York, president of the Orthodox Congregations of the United States and Canada. The Vaad Ha’ir Union of Orthodox Congregations of Greater Cincinnati, over which Rabbi Silver will have jurisdiction includes the following synagogues: Tiffereth Zion, Tiffereth Israel, Beth Tephillah, B’nai Israel, Avondale Synagogue, Knesseth Israel, B’nai Jacob, Covington Synagogue, Price Hill Synagogue, Ohave ‘Sholom, Yad Harutzim, and Beth Hamidrash Haggadol.

The coming of Rabbi Silver fills a long felt need in local Jewish communal life. The orthodox Jewish community of Cincinnati has for many years been a veritable storehouse of energy; but because of the lack of leadership this energy has often been misdirected and at times has been used at cross purposes with the highest interests of the community. Lacking an authoritative spokesman, the local orthodox Jewish groups never were fully represented in communal endeavors and consequently never gave their fullest response to communal needs. This need no longer be the case. Under an enlightened and far-sighted leadership, such as we understand Rabbi Silver’s to be, orthodox Jewry can partake fully of the privileges and responsibilities of our communal life.

Description
From the Every Friday newspaper published in Cincinnati.