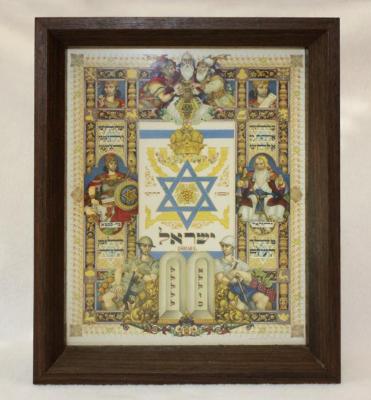 caption:
The cover of this music box is Arthur Szyk's Visual History of Israel, completed by the artist in 1948, the year of Statehood, and printed in 1949.

The blue Star of David dominates the print, with the 'Crown of the Good Name'; directly above, and Hillel's dictum 'If I am not for myself, Who will be for me?' below. The clusters of grapes symbolize the historic bounty and productivity of the land. This is a direct reference to the large grapes Joshua and Caleb brought back after a brief spy trip into the Land of Israel, before Joshua led the Israelites into Canaan. The phrase, 'The time of our freedom', also appears with the Star, referring to the Deliverance of the Israelites from Egypt.

Bar Kochba sits to the left of the Star. He led a temporarily successful revolt against the Romans 65 years after they had destroyed the Holy Temple in Jerusalem (in 70 C.E.). His shield displays the Star of David, which symbolizes God's security and strength. The prophet Ezekiel sits to the right. He foretold the return of the Jews to their Homeland after their 70 years of captivity in Babylon.

The two tablets containing the Ten Commandments anchor the lower section, flanked on the right by the pioneer builder (chalutz) and on the left by the soldier. The activity of both has been essential to the well-being and success of Israel, especially since 1948. The oranges next to the soldier, now exported worldwide, mirror the grapes on the opposite side as a contemporary expression of Israel's accomplishment. Two fierce Lions of Judah sit poised at both sides of the base of the Decalogue.

The Hebrew script both above and below Bar Kochba and Ezekiel proclaim: 'Praise be You God, our God, King of the Universe, who had kept us alive, sustained us, and enabled us to commemorate this time.' This prayer for newness and celebration refers to the blessing of the creation of the New State of Israel.

The historic organization of Israel into twelve tribes is depicted throughout the painting by the twelve yellow colored symbols, one for each of the twelve tribes. Interspersed along the four vertical columns, these signs of the tribes integrate the composition just as the tribes they symbolize represented the heart of the Nation of ancient Israel long ago.

Description
Arthur Szyk (1894 - 1951) was a Polish-Jewish artist born in Lodz, and later became an American citizen. He primarily worked as a book illustrator and political artist throughout his career. He became a renowned artists as early as the interwar period; his worked exhibited and published around the world. He gained more popularity in the United States through his political caricatures in which he savaged the policies and personalities of the leaders of the Axis powers. After the war, he continued to devote himself to political issues such as the support of the creation of the State of Israel.