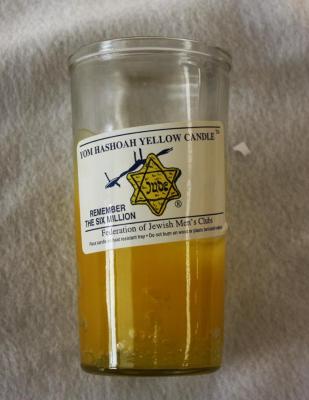 Description
The Yellow Candle was created in 1981 by FJMC clubs in Canada, New England and other locations to keep alive the memory of the Six Million who perished in the Shoah. The candle is modeled after a traditional Yahrzeit candle that burns for 24 hours during periods of mourning and on the Yahrzeit anniversary of a family member. The yellow wax of the candle is intended to remind peole of the yellow arm band which the Jews were forced to wear during the Nazi regime.