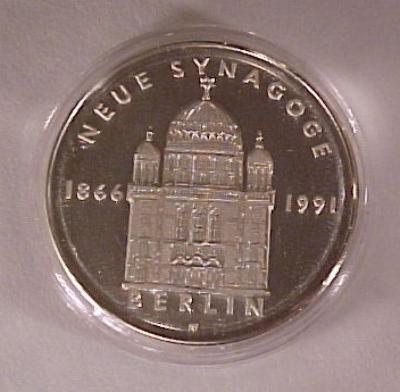 Description
The Oranienburger Strasse Synagogue was one of the largest synagogues in the world when it was opened.  It was the first synagogue, which used gas lights to illuminate the interior instead of the commonly used candles or oil lamps.  The hall seated more than 3000 women in the galleries.  The bema contained not only the ark, but also had space for the choir and organ.  The reader’s desk was next to the ark.  This was regarded as one of the richest and most fashionable synagogues of its day.

On Kristallnacht it was burned and badly damaged.

The New Jewish community of Berlin has issued silver and gold medals in .999 fine, commemorating the Oranienburger Strasse Synagogue.