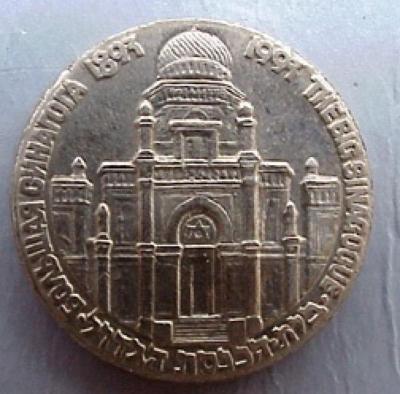 caption:
The obverse shows the front of the synagogue, with the large Star of David above the entrance door.  The dates 1893 – 1993 are incuse on either side of the dome.  There is an inscription in Russian, Hebrew and English reading “The Big Sinagogue”.

The Great Synagogue of Saint Petersburg called the Big Synagogue, is an imposing Moorish-style stone building which was erected in 1893 and remains as one of the largest synagogues in Europe.  The synagogue proper seats about thirteen hundred, but with the huge women’s gallery and five smaller chapels, all linked by a modern loudspeaker system, more than four thousand can be accommodated.  During the High Holy Days the loudspeaker system also reaches outdoors because the street in front of the synagogue is thronged with worshipers.

There is an impressive entrance gate of wrought iron inscribed with Hebrew mottoes.  Beyond the gate is a large lobby, with stairways on either side leading to the women’s gallery.  The Ark is under a canopy, above which is a neon-lighted Star of David.  The two large Menorahs flanking the Ark are also neon-lighted.  On the lower level are the chapels, one of which contains a permanent sukkah; a sumptuous wedding hall; a library containing thousands of Hebrew books, sets of the Talmud and a small collection of Torah Scrolls; a ritual bath for women; and a ritual slaughterhouse for preparing kosher meat.  There is also a smaller synagogue on the main floor.