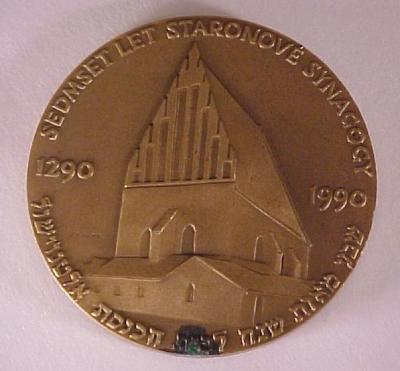 The Altneuschul (the Old-New Synagogue) of Prague 700th Anniversary Medal

caption:
Obverse:          Depicts the façade of the synagogue.  Above is an inscription in Czech, which means the same as the inscription at the bottom, which is in Hebrew.  The inscriptions translate as “700 Years of the Old-New Synagogue.”  To the left of the building is the date of its founding; 1290; to the right, the date of the medal, 1990.  Also on the left, below the date, in the field, in incused letters, is the name of the medallist, J.V. HAMPL.

Description
The Altneuschul (the Old-New Synagogue) of Prague is the oldest standing synagogue in Europe.  The structure is as impressive for its gloomy and haunting interior, created by its narrow windows, as for its unique and bold exterior.  The originality of the design was no doubt influenced by the fact that the building was intended to stand in the heart of the Jewish quarter, where the architects felts they didn’t need to fear criticism from the outside forces.  I think that it can be safely said that the architects have succeeded in creating a Gothic structure of great elegance and spirituality, free of the Christian symbolism and forms which usually dominate this style.

In 1990, the government of Czechoslovakia, then near the end of its existence as a communist government and as that of a unified country, issued a commemorative medal marking the 700th anniversary of this great structure.