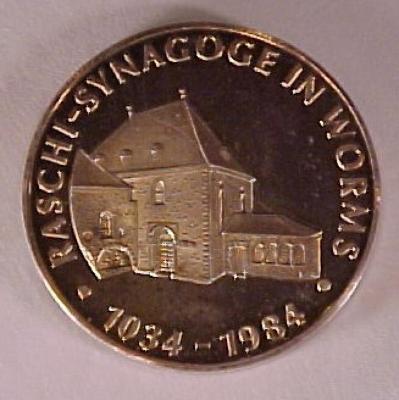 caption:
The Front / Obverse depicts the exterior of the Synagogue with a legend in German "Raschi-Synagoge Worms 1034-1984".

Description
This Synagogue is considered the oldest existing Synagogue in Germany: it was originally built in 1034 by Yaakov Ben David and his wife Rachel, but was and destroyed in 1096 during the First Crusade and again in 1146 during the Second Crusade; it was rebuilt in 1175 as the new Mens Synagogue (also known as the Alte - old - Synagogue) which was subsequently damaged, restored and even expanded several times during the Middle Ages.  It was desecrated in 1615. In 1624 the building was restored and the Rashi Chapel was added by David Joshua Oppenheim.  The Synagogue was totally destroyed in Kristallnacht (1938). The Synagogue was rebuilt between 1958-1961.