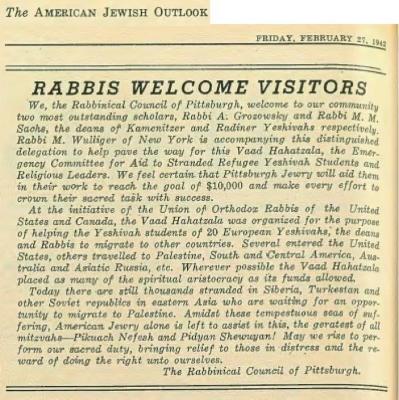 We, the Rabbinical Council of Pittsburgh, welcome to our community two most outstanding scholars, Rabbi A. Grozowsky and Rabbi M. M. Sachs, the deans of Kamenitzer and Radiner Yeshivahs respectively. Rabbi M. Wulliger of New York is accompanying this distinguished delegation to help pave the way for this Vaad Hahatzala, the Emergency Committee for Aid to Stranded Refugee Yeshivah Students and Religious Leaders. We feel certain that Pittsburgh Jewry will aid them in their work to reach the goal of $10,000 and make every effort to crown their sacred task with success.

At the initiative of the Union of Orthodox Rabbis of the United States and Canada, the Vaad Hahatzala was organized for the purpose of helping the Yeshivah students of 20 European Yeshivahs; the deans and Rabbis to migrate to other countries. Several entered the United States, others travelled to Palestine, South and Central America, Australia and Asiatic Russia, etc. Wherever possible the Vaad Hahatzala placed as many of the spiritual aristocracy as its funds allowed.

Today there are still thousands stranded in Siberia, Turkestan and other Soviet republics in eastern Asia who are waiting for an opportunity to migrate to Palestine. Amidst these tempestuous seas of suffering, American Jewry alone is left to assist in this, the greatest of all mitzvahs--Pikuach Nefesh and Pidyan Shewuyan! May we rise to per. form oar sacred duty, bringing relief to those in distress and the reward of doing the right unto ourselves.

The Rabbinical Council of Pittsburgh.