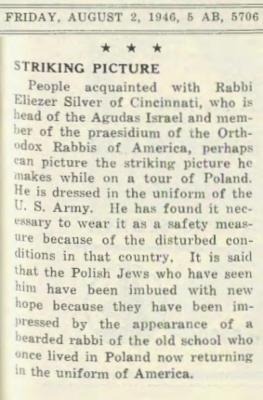 People acquainted with Rabbi Eliezer Silver of Cincinnati, who is head of the Agudas Israel and member of the presidium of the Orthodox Rabbis of America, perhaps can picture the striking picture he makes while on a tour of Poland. He is dressed in the uniform of the U. S. Army. He has found it necessary to wear it as a safety measure because of the disturbed conditions in that country. It is said that the Polish Jews who have seen him have been imbued with new hope because they have been impressed by the appearance of a bearded rabbi of the old school who once lived in Poland now returning in the uniform of America.