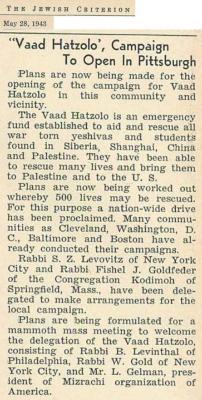 Article Regarding Vaad Hahatzala Campaign to Open in Pittsburgh from the Jewish Criterion (Pittsburgh, PA) - May 28, 1943

Plans are now being made for the opening of the campaign for Vaad Hatzolo in this community and vicinity.

The Vaad Hatzolo is an emergency fund established to aid and rescue all war torn yeshivas and students found in Siberia, Shanghai, China and Palestine. They have been able to rescue many lives and bring them to Palestine and to the U. S.

Plans are now being worked out whereby 500 lives may be rescued. For this purpose a nation-wide drive has been proclaimed. Many communities such as Cleveland, Washington, 33. C., Baltimore and Boston have already conducted their campaigns.

Rabbi S. Z. Levovitz of New York City and Rabbi, Fishel J. Goldfeder of the Congregation Kodimoh of Springfield, Mass., have been dele-gated to make arrangements for the local campaign.

Plans are being formulated for a mammoth mass meeting to welcome the delegation of the Vaad Hatzolo, consisting of Rabbi B. Levinthal of Philadelphia, Rabbi W. Gold of New York City, and Mr. L. Gelman, president of Mizrachi organization of America.