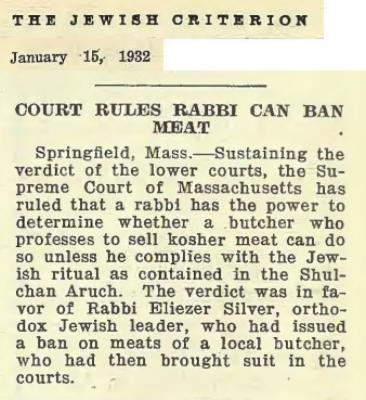 Article Regarding Rabbi Eliezer Silver Winning a Court Battle Allowing Him to Ban the Term "Kosher" for Meat Not Prepared in Accordance With Jewish Law - January 15, 1932

Springfield, Mass.—Sustaining the verdict of the lower courts, the Supreme Court of Massachusetts has ruled that a rabbi has the power to determine whether a butcher who professes to sell kosher meat can do so unless he complies with the Jewish ritual as contained in the Shulchan Aruch. The verdict was in favor of Rabbi Eliezer Silver, orthodox Jewish leader, who had issued a ban on meats of a local butcher, who had then brought suit in the courts.