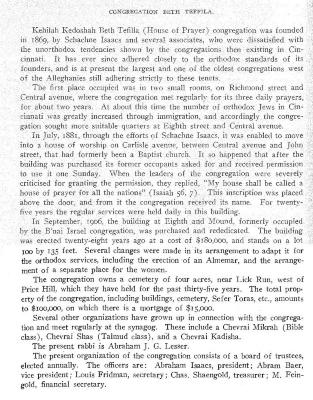 Kehilah Kedoshah Beth Tefilla (House of Prayer) congregation was founded in 1869, by Schachne Isaacs and several associates, who were dissatisfied with the unorthodox tendencies shown by the congregations then existing in Cincinnati. It has ever since adhered closely to the orthodox standards of its founders, and is at present the largest and one of the oldest congregations west of the Alleghanies still adhering strictly to these tenets.

The first place occupied was in two small rooms, on Richmond street and Central avenue, where the congregation met regularly for its three daily prayers, for about two years. At about this time the number of orthodox Jews in Cincinnati was greatly increased through immigration, and accordingly the congregation sought more suitable quarters at Eighth street and Central avenue.

In July, 1881, through the efforts of Schachne Isaacs, it was enabled to move into a house of worship on Carlisle avenue, between Central avenue and John street, that had formerly been a Baptist church. It so happened that after the building was purchased its former occupants asked for and received permission to use it one Sunday. When the leaders of the congregation were severely criticised for granting the permission, they replied, "My house shall be called a house of prayer for all the nations" (Isaiah 56, 7). This inscription was placed above the door, and from it the congregation received its name. For twenty- five years the regular services were held daily in this building.

In September, 1906, the building at Eighth and Mound, formerly occupied by the B'nai Israel congregation, was purchased and rededicated. The building was erected twenty-eight years ago at a cost of $180,000, and stands on a lot lOO by 135 feet. Several changes were made in its arrangement to adapt it for the orthodox services, including the erection of an Almemar, and the arrangement of a separate place for the women.

The congregation owns a cemetery of four acres, near Lick Run, west of Price Hill, which they have held for the past thirty-five years. The total property of the congregation, including buildings, cemetery, Sefer Toras, etc., amounts to $100,000, on which there is a mortgage of $15,000.

Several other organizations have grown up in connection with the congregation and meet regularly at the synagog. These include a Chevrai Mikrah (Bible class), Chevrai Shas (Talmud class), and a Chevrai Kadisha.