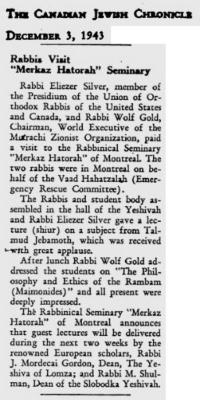 Article Regarding the Visit of Rabbi Eliezer Silver and Rabbi Wolf Gold to the Merklaz Hatorah Seminary in Montreal, Canada in 1943

caption:
From The Canadian Jewish Chronicle

Rabbi Eliezer Silver, member of the Presidium of the Union of Orthodox Rabbis of the United States and Canada, and Rabbi Wolf Gold, Chairman, World Executive of the Mizrachi Zionist Organization, paid a visit to the Rabbinical Seminary "Merkaz Hatorah" of Montreal.   The two rabbis were in Montreal on be-half of the Vaad Hahatzalah (Emergency Rescue Committee).

The Rabbis and student body assembled in the hall of the Yeshivah and Rabbi Eliezer Silver gave a lecture (shiur) on a subject from Talmud Jebamoth, which was received with great applause.

After lunch Rabbi Wolf Gold ad-dressed the students on "The Philosophy and Ethics of the Rambam (Maimonides)" and all present were deeply impressed.

The Rabbinical Seminary "Merkaz Hatorah" of Montreal announces that guest lectures will be delivered during the next two weeks by the renowned European scholars, Rabbi J. Mordecai Gordon, Dean, The Yeshiva of Lomza; and Rabbi M. Shulman, Dean of the Slobodka Yeshivah.