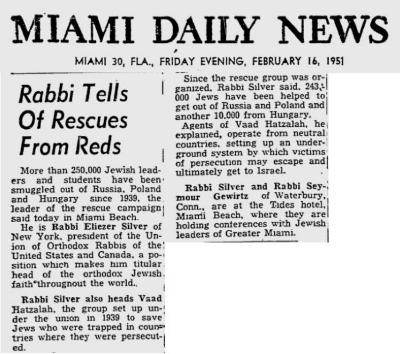 Article Regarding 250,000 Jews Having Been Saved by the VAAD Hatzalah as of 1951

Rabbi Tells Of Rescues From Reds

More than 250,000 Jewish leaders and students have been smuggled out of Russia, Poland and Hungary since 1939, the leader of the rescue campaign said today in Miami Beach.

He is Rabbi Eliezer Silver of New York, president of the Union of Orthodox Rabbis of the United States and Canada, a position which makes him titular head of the orthodox Jewish faith throughout the world.

Rabbi Silver also heads Vaad Hatzalah, the group set up under the union in 1939 to save Jews who were trapped in countries where they were persecuted.

Since the rescue group was organized, Rabbi Silver said, 243,000 Jews have been helped to get out of Russia and Poland and another 10,000 from Hungary.

Agents of Vaad Hatzalah, he explained, operated from neutral countries, setting up an underground system by which victims of persecution may escape and ultimately get to Israel.

Rabbi Silver and Rabbi Seymour Gewirtz of Waterbury, Conn., are at the Tides hotel, Miami Beach, where they are holding conferences with Jewish leaders of Greater Miami.