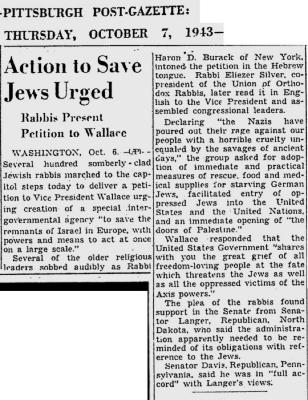 Action to Save Jews Urged
Rabbi Present Petition to Wallace

Washington, Oct. 6 - Several hundred somberly clad Jewish rabbis marched to the capitol steps today to deliver a petition to Vice President Wallace urging creation of a special intergovernmental agency “to save the remnants of Israel in Europe, with powers and means to act at once on a large scale.”

Several of the older religious leaders sobbed audibly as Rabbi Haron D. Burack of New York, intoned the petition in the Hebrew tongue. Rabbi Eliezer Silver, co-president of the Union of Orthodox Rabbis, later read it in English to the Vice President and assembled congressional leaders.

Declaring “the Nazis have poured out their rage against our people with a horrible cruelty unequaled by the savages of ancient days,” the group asked for adoption of immediate and practical measures of rescue, food and medical supplies. for starving German Jews, facilitated entry of oppressed Jews into the United States and the United Nations, and immediate opening of “the doors of Palestine.”

Wallace responded that the United States Government “shares with you the great grief of all freedom-loving people at the fate which threatens the Jews as well as all the oppressed victims of the Axis powers.”

The plea of the rabbis found support in the Senate from Senator Langer, Republican, North Dakota, who said administration apparently needed to be reminded of its obligations with reference to the Jews.

Senator Davis, Republican, Pennsylvania, said he was in “full accord” with Langer’s views.