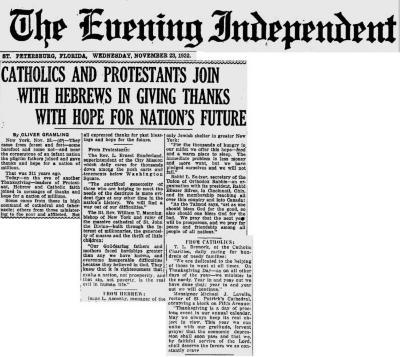 Article Regarding Thanksgiving Greetings in 1932 from Jewish, Catholic and Protestant Leaders

Catholics and Protestants Join with Hebrews in Giving Thanks with Hope for Nation’s Future.
By, Oliver Gramling

New York, Nov. 23. - (AP) - They came from forest and fort - some barefoot and some not - and near the cornerstone of an infant nation the pilgrim fathers joined and gave thanks and hope for a nation of million.

Today - on the eve of another Thanksgiving - leaders of Protestant, Hebrew and Catholic faith joined in messages of thanks and hope for a nation of millions.

Some came from those in high command of cathedral and tabernacle; others from those ministering to the poor and afflicted. But all expressed thanks for past blessings and hope for the future.

From Protestants:
The Rev. L. Ernest Sunderland, superintendent of the City Mission which daily cares for thousands down among the push carts and tenements below Washington Square.

“The sacrificial generosity of those who are helping to meet the needs to the destitute is more evident than at any other time in the nation’s history. We will find a way out of our difficulties.”

The Rt. Rev. William T. Manning, bishop of New York and ruler of the massive cathedral of St. John the Divine - built through the interest of millionaires, the generosity of the masses and the thrift of the little children:

“Our God-fearing fathers and mothers faced hardships greater than any we have known, and overcome insuperable difficulties because they believed in God. They knew that it is righteousness that exalts a nation, not prosperity, and that sin, not poverty, is the real evil in human life.”

From Hebrew: Isaac L. Asossky, manager of the only Jewish shelter in New York:

“For thousands of hungry in our midst we offer this hope - food an a warm place to sleep. The immediate problem is less money and more want, but we have pledged ourselves and we will not fail.”

Rabbi L. Seitzer, secretary of the Union of Orthodox Rabbis an organization with its president, Rabbi Eliezer Silver, in Cincinnati, Ohio, and its membership reaching all over this country and into Canada:

“As the Talmud says, just as one should bless God for the good, so also should one bless God for the bad. We pray that the next year will be prosperous, and we pray for peace and friendship among all people of all nations.”

From Catholics: T.L. Brenock, of the Catholic Charities, daily caring for hundreds of needy families:

“Thanksgiving is a day of precious event in our annual calendar. May we always keep its real object in view. This year we can unite with our gratitude, forvent prayer that the economic depression shall soon pass and that we, by faithful service of the Lord, shall deserve that favors we so constantly crave."