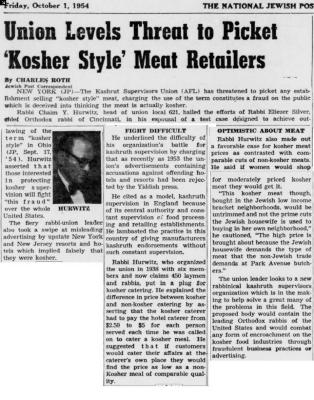 NEW YORK (JP) - The Kashrut Supervisors Union (AFL) has threatened to picket an establishment selling “kosher style” meat, charging the use of the term constitutes fraud on the public, which is deceived into thinking the meat is actually kosher.

Rabbi Chaim Y. Hurwitz, head of union local 621, hailed the efforts of Rabbi Eliezer Silver, chief Orthodox rabbi of Cincinnati, in his espousal of a test case designed to achieve outlawing of the term “kosher style” in Ohio. Hurwitz asserted that those interested in protecting kosher supervision will fight “this fraud” over the whole United States.

The fiery rabbi-union leader also took a swipe at misleading advertising by upstate New York and New Jersey resorts and hotels which implied falsely that they were kosher.

He underlined the difficulty of his organization’s battle for kashruth supervision by charging that as recently as 1953 the union’s advertisements containing accusations against offending hotels and resorts had been rejected by the Yiddish press.

Rabbi Hurwitz, who organized the union in 1938 with six members and now claims 450 laymen and rabbis, put in a plug for kosher catering. He explained the difference between kosher and non-kosher catering by asserting that the kosher caterer had to pay the hotel caterer from $2.50 to $5 for each person served each time he was called on to cater a kosher meal. He suggested that if customers would cater their affairs at the caterer’s own place they would find the price as low as non-Kosher mea or comparable quality.

Rabbi Hurwitz also made out a favorable case for kosher meat prices as contrasted with comparable cuts of non-kosher means. He said if women would shop for moderately priced kosher meat they would get it.

The union leader looks to a new rabbinical kashruth supervisors organization which is in the making to help solve a great many of the problems in this field. The proposed body would contain the leading Orthodox rabbis of the United States and would combat any form of encroachment on the kosher food industries through fraudulent business practices or advertising.