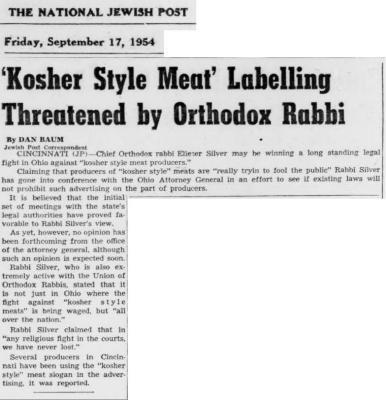 Claiming that producers of "kosher style" meats are "really trying to fool the public" Rabbi Silver has gone into conference with the Ohio Attorney General in an effort to see if existing laws will not prohibit such advertising on the part of producers.

It is believed that the Initial   set of meetings with the state's legal authorities have proved favorable to Rabbi Silver's view.

As yet, however, no opinion has been forthcoming from the office of the attorney general, although such an opinion is expected soon.

Rabbi Silver, who is also extremely active with the Union of Orthodox Rabbis, stated that it is not just in Ohio where the fight against "kosher style meats" is being waged, but "all over the nation."

Rabbi Silver claimed that in "any religious fight in the courts, we have never lost."

Several producers in Cincinnati have been using the "kosher style" meat slogan in the advertising, it was reported.