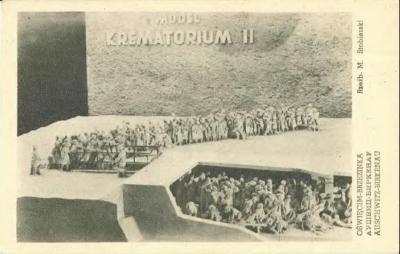 Auschwitz-Birkenau Postcard Showing a Model of one of the Crematorium

caption:
Believed to have been issued in 1952, this postcard is captioned in Polish, Russian, French, and English, the text reads, "Model of crematorium section."

The postcard depicts part of the plaster model of crematorium II as exhibited in block 4 of the State Museum Auschwitz -Birkenau. A group Jewish deportees entering the underground undressing room, which led, via a vestibule, to the underground gas chamber.