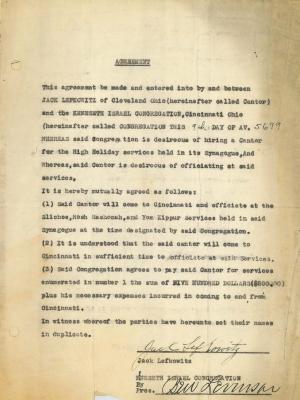 Contract Hiring Cantor Jack Lefkowitz to Serve as Cantor for the Kneseth Israel Congregation (Cincinnati, Ohio) for the High Holiday Services in 1939 / 5699

caption:
AGREEMENT
This agreement be made and entered into by and between JACK LEFKOWITZ of Cleveland Ohio (hereinafter called Cantor) and the KNESETH ISRAEL CONGREGATION, Cincinnati Ohio (hereinafter called CONGREGATION THIS 9th DAY OF AV. 5699) WHEREAS said Congregation is desirous of hiring a Cantor for the High Holiday services held in its Synagogue, and Whereas, said Cantor is desirous of officiating at said services, It is hereby mutually agreed as follows: