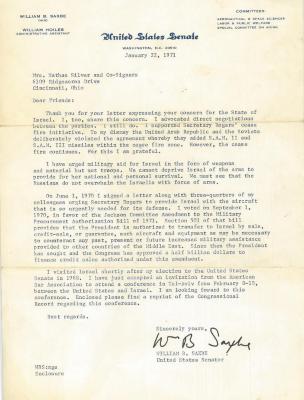 Letter from Senator William B. Saxbe to Mr. Nathan Silver in 1971 regarding his Support for the State of Israel

caption:
WILLIAM B. SAXBE OHIO
WILLIAM HOILES ADMINISTRATIVE ASSISTANT
COMMITTEES:
AERONAUTICAL & SPACE SCIENCES LABOR & PUBLIC WELFARE SPECIAL COMMITTEE ON AGING
United States Senate
WASHINGTON, D.C. 20510
January 22, 1971
Mr. Nathan Silver and Co-Signers 6109 Ridgeacres Drive Cincinnati, Ohio
Dear Friends:
Thank you for your letter expressing your concern for the State of Israel. I, too, share this concern. I advocated direct negotiations between the parties. I still do. i supported Secretary Rogers' cease fire initiative. To my dismay the United Arab Republic and the Soviets deliberately violated the agreement whereby they added S.A.M. II and S.A.M. III missiles within the cease fire zone. However, the cease fire continues. For this I am grateful.
I have urged military aid for Israel in the form of weapons and material but not troops. We cannot deprive Israel of the arms to provide for her national and personal survival. We must see that the Russians do not overwhelm the Israelis with force of arms.
On June 1, 1970 I signed a letter along with three-quarters of my colleagues urging Secretary Rogers to provide Israel with the aircraft that is so urgently needed for its defense. I voted on September 1, 1970, in favor of the Jackson Committee Amendment to the Military Procurement Authorization Bill of 1971. Section 501 of that bill provides that the President is authorized to transfer to Israel by sale, credit-sale, or guarantee, such aircraft and equipment as may be necessary to counteract any past, present or future increased military assistance provided to other countries of the Middle East. Since then the President has sought and the Congress has approved a half billion dollars to finance credit sales authorized under this amendment.
I visited Israel shortly after my election to the United States Senate in 1968. I have just accepted an invitation from the American Bar Association to attend a conference in Tel-Aviv from February 8-10, between the United States and Israel. I am looking forward to this conference. Enclosed please find a reprint of the Congressional Record regarding this conference.
Best regards.
Sincerely yours,
WILLIAM B. SAXBE
United States Senator