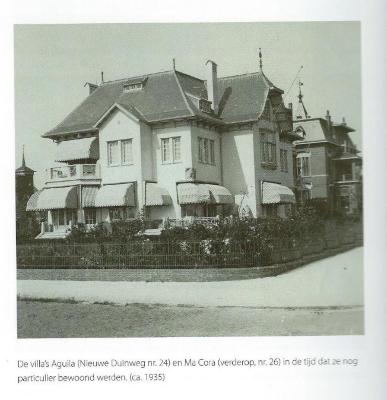 Items relating to Henry Fenichel and his Parents, Moritz and Paula [Pessel] Fenichel, from their Hiding and Capture by the Nazis

In 2014, Henry Fenichel attempted to locate this building.  He started to knock on doors in the neighborhood and located someone who kept records of the neighborhood.  This individual had written a 3 volume set regarding the neihborhood and shared with Henry the pages regarding Villa Aguilla and what happened there.

Description
The woman who hid them was Sedjah Frank [sp?].  This villa served as an infirmary with a kindergarden.  They were hiding in the open as patients in infirmary.  Paula was not really sick but had to pretend to be sick.  Henry got to play with the other kids in the infirmary.

This house is no longer standing.

They were caught here and transferred to a collection site in Amsterdam.  In Amsterdam, they were rounded up in the "Jewish Theater" and held there for a few days.

From Amsterdam they were transferred to Westerbork Transit Camp.  Westerbork was run by a Jewish Commission who were responsible for presenting 1,000 Jews every Tuesday morning for transport to the east.

While in Westerbork, word got out that they were looking for Jews with connections to Palestine to trade for German Templers who were living in Palestine.

Henry's faher's parents and brother and sister were in Palestine.  Henry's father and mother were slated to immigrate to Palestine but were blocked when the Nazi's invaded.

Neighbors helped them bring papers to Westerbork to help prove the connection to Palestine.

Were held in Westerbork from Summer of 43 until Feb 1, 1944.  Then shipped to Bergen Belsen.  In Bergen Belsen until June 30, 1944.  At roll call, called 222 Dutch Jews and loaded them on regular trains for a ten day train trip to Palestine.

These documents were acquired by Henry Fenichel in 2014 on a trip to the Netherlands.  He discovered the documents in an agency that preserves records from the Holocaust and other genocides.