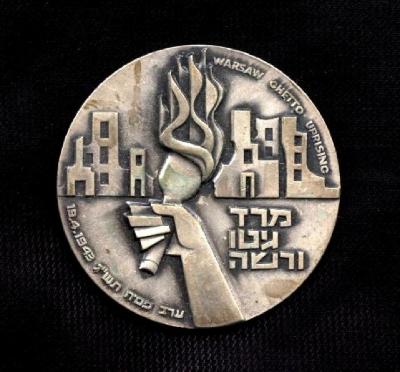 caption:
The obverse of the medal has a high relief picture of a hand holding a burning torch against the background of the destroyed Warsaw Ghetto, representing the continuing of Jewish life after the destruction of much of European Jewry.  Under the picture in Hebrew is “Warsaw Ghetto Uprising”.  Curved around the upper right rim is “WARSAW GHETTO UPRISING”.  Curved around the lower left rim in Hebrew and English is “19.4.1943” (the date represents the start of the Uprising).

Description
The Ghetto Fighters’ House was founded in 1949 by Holocaust survivors, ghetto fighters and partisans, who settled in the Western Galilee and set up Kibbutz Lohamei HaGetaot on the main road (Route 2) from Akko (Acre) to Nahariya.  There is significance in the fact that the Ghetto Fighters’ House adjoins the kibbutz; the kibbutz is a living community, reflecting the rebuilding of Jewish life and faith in the future of the Jewish people after the Holocaust.

Initially the Ghetto Fighters’ House functioned as a documentation center. In the 1950’s it developed into a museum, a research institute and a center for education.  The museum contains permanent historical and documentary exhibitions that deal with three main topics: (1) Jewish life before the Holocaust, (2) the Holocaust period and the fate of the Jewish People; and (3) Jewish resistance and uprising.