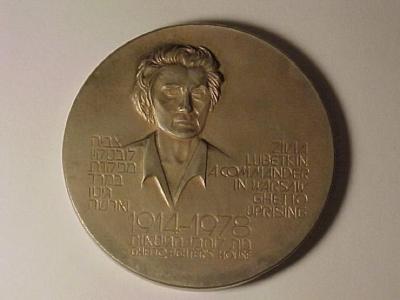 caption:
The obverse of this medal portrays a high relief bust of Zivia Lubetkin with her name and inscription “A Commander in Warsaw Ghetto Uprising” written both in Hebrew and English to the left and right of the bust respectively.  Below the portrait are the dates “1914-1978”, the years of her birth and death and “Ghetto Fighter’s House” also in English and Hebrew.

Description
This medal was issued to commemorate Zivia Lubetkin, one of the founders of the Jewish Fighting Organization (ZOB) and one of the commanders of the Warsaw Ghetto Uprising.  It was issued in bronze, silver-plated, silver, and gold-plated and is 59 mm in diameter.

Zivia (Celina) was born in 1914 in Beten, in eastern Poland. Zivia at the age of 16 joined Dror, the Zionist pioneering youth movement, eventually becoming a member of He-Halutz and a part of its executive council and was a delegate to the 1939 Zionist Congress in Geneva.

When World War II broke out, she was caught in the Soviet occupied part of Poland, but in 1940 she made her way back to German occupied Warsaw to take part in underground operations. She, like others, chose to return to Poland to share the fate of her people, rather than escaping to Palestine. Her resistance activities began long before armed resistance broke out, with her role as a courier of messages and a smuggler of arms into the Ghetto from the “Aryan side” of Warsaw.

Lubetkin was one of the leaders in establishing the ZOB and the only woman in its high command.  She spent the last days of the uprising in the command bunker at 18 Mila Street, and when the Uprising faded out, she escaped with other fighters on May 10, 1943, through the sewers to the Aryan side of Warsaw.

Zivia was among those Jewish resistance fighters who answered the call to join the Polish uprising on the Aryan side of Warsaw in August 1944, fighting alongside those whose indifference to the fate of the Jewish Ghetto fighters played a part in the ultimate destruction of the Ghetto. When the Polish uprising was suppressed by the Germans, she went into hiding until the arrival of the Soviet Army.

After the liberation, Zivia was active in the Briha movement, which facilitated the movement of Jewish Holocaust survivors to Palestine.  She herself immigrated to Palestine and was among the founders of Kibbutz Lohamei Hagetaot of which she was a member until her death. She was also among the initiators of the Ghetto Fighters’ House Holocaust and Resistance Heritage Museum in the name of Yitzhak Katzenelson (the famous Holocaust poet). She died in 1978.