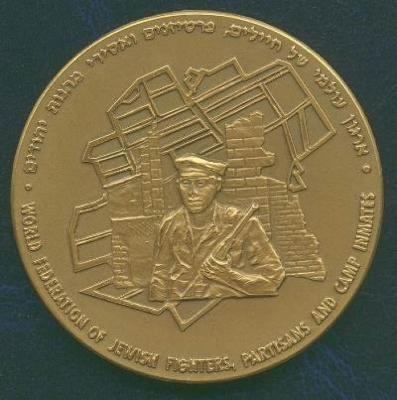 caption:
The obverse of the medal has in the center, a portrait of a Jewish Ghetto fighter with a rifle in his hands set against a map of the Warsaw Ghetto and a crumbled wall from one of the many destroyed buildings in the Ghetto.  In Hebrew and English curved around the upper and lower edges is “WORLD FEDERATION OF JEWISH FIGHTERS, PARTISANS AND CAMP INMATES”.

Description
This medal was issued in 1993 by the World Federation of Jewish Fighters, Partisans and Camp Inmates to commemorate the 50th anniversary of the Warsaw Ghetto Uprising.  It was struck by the Israel Government Coins and Medal Corporation.  It was minted in bronze (59 mm) and silver (50 mm).  2,943 were issued in bronze and 560 were issued in silver.  Each medal is individually numbered on the rim.