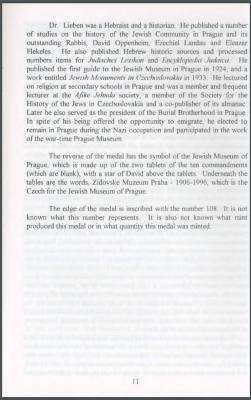 Description
In the late 19th Century, the City of Prague began an extensive reconstruction of Prague’s ancient Jewish Ghetto.  In 1906, due largely to the effort of one man, the noted historian Dr. Salomon Hugo Lieben (1881 – 1942), the Jewish Museum of Prague (the “Prague Museum”) was founded with the intention of preserving monuments from synagogues that were to be demolished that year as part of the reconstruction.

The Statutes of the Association for the Founding and Maintenance of the Jewish Museum in Prague were approved on August 29, 1906. The main objective of the Association was to collect, preserve and exhibit ritual items of household and synagogue worship as well as archive materials, manuscripts and old printed books depicting Jewish history and illustrations of Jewish monuments and personalities. The Prague Museum was intended to solely base its collections on items from Jewish communities in Bohemia and Moravia.

The Prague Museum’s first exhibition opened to the public in the Spring of 1909 and its first guidebook was published in 1924.  After the occupation of Czechoslovakia by the Nazis on March 15, 1939, all further activities of the Prague Museum were rendered impossible. The Museum Association was dissolved and the Prague Museum’s collections fell under the administration of the Prague Jewish Community.
In late 1941, all of Prague’s synagogues were closed by the Nazis and converted into warehouses for confiscated Jewish property.  Jewish communities throughout Czechoslovakia soon started to be evacuated as a result of Nazi mandated deportations to concentration and death camps.

At the beginning of 1942, in a desperate attempt to save Jewish artifacts from the rapidly dwindling and disappearing Jewish communities throughout Czechoslovakia, the head of the Jewish Administration of the Provincial Communities, Dr. Karel Stein (1906 – 1961), developed a proposal for the establishment of a central Jewish museum in Prague.  It was intended that this museum would be based on the already existing collections from the Prague Museum and the Jewish Museum of Mikulov.  Adding to these already existing collections would be cult objects from the various Synagogues in Prague, and other artifacts from the pre-war Jewish communities in Bohemia and Moravia, which were being decimated of their Jewish inhabitants.  After protracted negotiations, the Nazi authorities finally approved the project.  The Nazis determined that such a museum could later be useful to educate future generations as to the vanished Jewish race.

Those called upon to work on the project included Dr. Salomon Hugo Lieben, the original founder of the Prague Museum.  The new Prague Museum set to work on August 3, 1942. Shipments of selected items from all the former Jewish communities in Czechoslovakia soon started arriving in Prague at an ever-increasing rate. These items were listed, classified and catalogued in the Prague Museum. The Prague Museum staff was then ordered to set up exhibitions in the evacuated synagogues of Prague. The exhibitions included displays of Hebrew manuscripts and old printed books, medieval synagogue architecture, and Jewish customs and traditions.

Working under intolerable conditions and with the constant threat of deportation or arrest, the Prague Museum staff managed to create in just two years a project which under normal conditions would have taken decades to complete.  During such time, objects from 153 liquidated Jewish communities spanning all of Czechoslovakia were brought to the Prague Museum. During the summer and autumn of 1944, the majority of the senior staff of the Prague Museum were deported to the Terezin Ghetto and to Auschwitz, while the remaining Prague Museum employees were deported in February 1945.

Immediately after the war, the Prague Museum renewed its activities under the administration of the Council of Jewish Communities in Czechoslovakia.  A new department was created to document wartime persecution and monuments.  Restitution of confiscated property to the original owners continued until 1949 and ritual objects were provided for the needs of the 52 re-started Jewish communities.

Today this institution is in charge of one of the largest collections of Judaic art in the world containing some 40,000 objects and more than 100,000 books. It is unique, not only in terms of the number of its objects, but primarily because they are from a single territory - that of the whole of Bohemia and Moravia. In its entirety the collection thus presents an integrated picture of the life and history of Jews and Jewish life in this region.

This medal was issued by the Jewish Museum in Prague to celebrate and to commemorate the 90th anniversary of founding and the 50th anniversary of its re-opening after the liberation of Czechoslovakia from the Nazi occupation.  The medal was sculpted by Czech artist Michal Vitanovsky and features a portrait of Dr. Salomon Hugo Lieben, the founder of the museum.

Dr.  Lieben was a Hebraist and a historian.  He published a number of studies on the history of the Jewish Community in Prague and its outstanding Rabbis, David Oppenheim, Ezechiel Landau and Eleazar Flekeles.  He also published Hebrew historic sources and processed numbers items for Judisches Lexikon and Encyklopedia Judaica.  He published the first guide to the Jewish Museum in Prague in 1924, and a work entitled Jewish Monuments in Czechoslovakia in 1933.  He lectured on religion at secondary schools in Prague and was a member and frequent lecturer at the Afike Jehuda society, a member of the Society for the History of the Jews in Czechoslovakia and a co-publisher of its almanac.  Later he also served as the president of the Burial Brotherhood in Prague.  In spite of his being offered the opportunity to emigrate, he elected to remain in Prague during the Nazi occupation and participated in the work of the war-time Prague Museum.